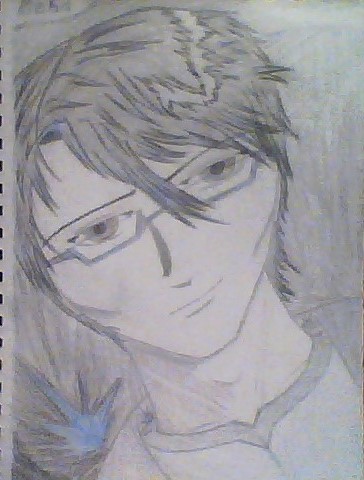 I'm sorry the qaulity of this picture is so bad, I just needed to upload something and haven't used the scanner yet plus the camera I'm using is making my pictures more then 1MB and anything over that SWAG wont let me upload soooo.... :P

Anyway. So a bit about this drawing, (other then his head being a little wide or his eyes being to close I like it)

This is Heavy Trooper Sergeant Beta, he's one of my older clone characters that I have. And the reason for his glasses is this: He has a fascination with explozives likes to play around with them and mix his own, and well, some of the blasts are so powerful, the dimmers on his helmit don't always kick in fast enough to protect his eyes. So, a engineer friend of his, (Cole) made him some glasses that have a built in HUD for when he's not waring his helmit, plus, when folded there are two little blades that can be popped out of the sides to use as a weapon.

As for his personality, Beta is pretty kind hearted, sweet, a best friend, loyal, well mannered (other then when he is being a pyromanic xD ) and over all just a really calm and good guy. But, that doesn't mean he doesn't have his demons to deal with. After all, he is a born and bred killer and had ARC training plus has been captured, tortured, seen loads of blood shed, lost close friends and can't seem to find the one girl he cares about...

So, yep, thats a sum up of Beta. Again, really sorry for the horrible qaulity picture :/