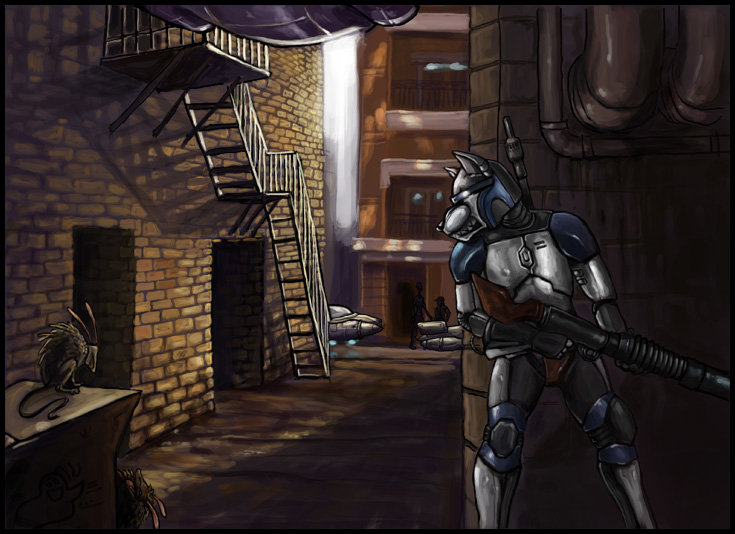 Well StarWolf, you don't win the prize for the request I've spent the longest sitting on, but I'm pretty sure you've just won 'most time I've spent actually physically working on a SWAG request'! :D Hopefully it's paid off. This is StarWolf's character, WF-RM01 a custom security droid built to look something like a human in powered armour, with a wolf-like head. I stuck with the suggestion of basing it on Mandolorian armour because, well, droids are still kind of scary for me to tackle and that allowed me a wealth of relatively easy-to-work-from reference material. He's on the run from two droid companies and a Hutt gangster. And surely somewhere in the galaxy is a planet that still uses bricks? If we can have primitives in mud huts than there's gotta be bricks somewhere. Why did I choose bricks.

Jeez Louise! That's amazing! I hope StarWolf realizes what kind of deal he got!

A most excellent design and the detail is incredible. Two thumbs up.

Excellent scene and I think the bricks turned out great.

It all looks great (bricks included).

OMG! Tusserk, this looks amazing! Better than I had hoped. I love the background you put him in, the bricks give it a 'hiding in the dregs' feel. Love it, Love it! Thank you!

Thanks guys! :D And you're super welcome, StarWolf, glad you're pleased with it... ultimately, that's what makes the whole thing so worthwhile!!

This picture tells the story well and the background is simply amazing.