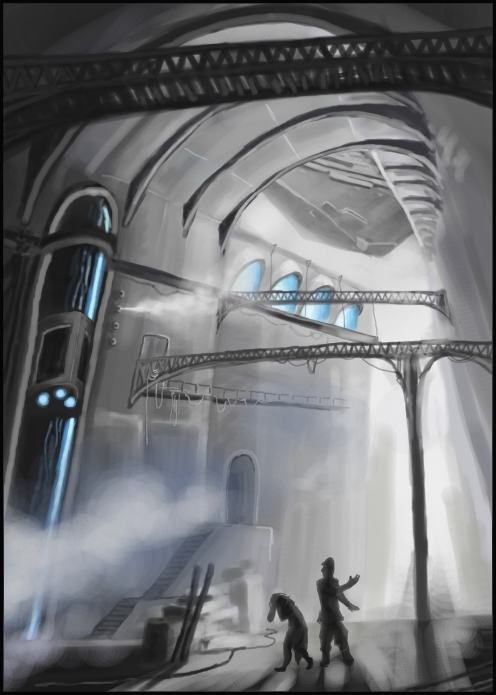 So, this is me trying to get better at things I'm really not good at! Whee, buildings. I can't draw a straight line to save myself! Though every stroke here was done by my own hand, basically none of the credit for the 'design' element of this drawing goes to me-- I've borrowed quite heartily from pre-existing works by great concept artists of spaceship hangars and the like. Was going for a very cold, industrial (and, naturally, Imperial) sort of look, I'm imagining shuttles would land on the rooftop to ferry people to/from the Star Destroyer, or be parked right inside if they needed maintenance done on them. I have come to realise I know basically nothing about this stuff!

Anyway, for those who've been following Tusserk's story, or are just curious about where this scene comes from;

While Tuss was Jerec's captive, being delightfully tortured for information and refusing to accept Jerec's offers of tutelage (and having some whacky out-of-body experiences on the side), GM announced that while being transferred to the Vengeance Tusserk would have the opportunity to send out a call for help. He gave me complete narrative freedom as to how this was achieved, and so I wrote the following!

We land without ceremony, I am dragged out of the transport. We’re in some sort of colossal hangar, there are people everywhere, everywhere. Imperials. All Imperials, I am surrounded. The windows are huge, I can see the sky... the sky..! ...and I feel I aught to fight. I don’t know what for, certainly not for my life. My life is gone. My body is probably ash by now, if they managed to recover it... kriff, I don’t even know if they made it out of there. Maybe we’re all dead. Maybe none of us survived. Maybe... maybe all that’s left truly is the information in my head, the information Jerec wants, he wants it so terribly because Omega Squad is no more, but with the facts, with the facts he could bring down Vader... maybe if I talk, I won’t be hurting anyone. No. NO! I wouldn’t, I couldn’t! He will never get a word from me. He is no different to Skywalker, no different at all, I would sooner die. Am I fighting for my death? Is that what I want? It was... it was so peaceful. Why can’t I just let go?

I must have been lagging, I feel myself shoved roughly forwards. I react, because I have seen the sky. I jerk away, kriff, this body aches! It is so miserable! These men, these Imperials, I can see them and hear them but they are blank to me, I see so much life and movement but it is like staring at a holo, I cannot feel the life. It is so wrong. This is wrong.

I’m shoved again, I twist away and Force help me I kick out at the men, they raise their arms and I strike at them, I get in a hit but it is pitiful, and this body buckles under the return blows. Oh, it hurts! It hurts! They hoist me up, I feel metal against my skin, this thin terrible skin, binder cuffs clasping around my wrists. Awful, skinny, bony wrists. They aren’t mine. This isn’t me. This isn’t me! I am Trandoshan, I am Alderaanian, I am a Jedi! I struggle, I try to pull away, I don’t know why because there is no point. They are stronger than me, and I have nothing.

I am passed along to another man. Just one, but I know he, too, is far stronger than me. He is less rough than the others, but he looks bored and cold. The expression on his face as he glances me over is one of disgust. He wastes no time in dragging me along, like he can’t wait to be rid of me. I stumble, oh, I am useless. I hate this. I hate it! No. No. No. Hate will get the better of me. I will not feed it. Must stay alert. Must stay aware. I have my mind. I still have my mind.

It takes me a while to realise that the man leading me along is singing.

Singing. I falter, I nearly trip again. Something, something, something... this is important. This is important!! Memories, memories, training. Oh, kriff, it’s been so long. Oh, I wish I could feel him. I always thought... I never imagined that I wouldn’t have the Force with me, this would be so much easier... I could trust so much quicker if I could just feel him...

I wait, until he pauses briefly in his rambling lyrics. It’s an old song, a frivolous one, that was popular in some human-centric circles over a decade ago. I take up the song where he left off, but I get it wrong. On purpose. When I start, it rolls off my tongue, so well practised that the incorrect lyrics feel more right to me than the originals.

He backhands me across the cheek, a scowl on his face. “Did I ask you to join in, witch?” he spits, but something in his eyes is different. My heart leaps.

Tor had pulled him aside after everyone else had left. Tusserk was still a little stunned by the proposal House Organa had put before him, and more than a little uncertain at how swiftly he’d agreed to it. He’d be leaving for Carida in just three days, and could tell nobody... nobody where he was going. He hadn’t even begun to acknowledge the fact that he couldn’t tell Trys. That she would simply have to accept whatever story the House put to her. He wouldn’t even be able to say goodbye.

“Tusserk,” the gruff bothan said, clasping a hand over his weedy shoulder. Tor’s brows were creased, he looked as uncertain as Tusserk felt... and that was saying something. Tor was one of the most solid, unflappable guys Tusserk knew. “I...” he hesitated, looked away, and then clenched his teeth and stared straight into the trandoshan’s eyes. “They’d bust my hide if they knew I was telling you this. I’d be willing to bet your father doesn’t even know this, and I’m certainly not ‘supposed’ to. But I know what you’re about to do is going to hurt my girl a lot... heh, yes, I know you know it too. But that’s for me to worry about, not you. Thing is, I want to do everything I can to make sure that you don’t get into trouble so deep that there’s no chance of you two seeing each other again, y’hear?”

Tusserk nodded, slowly and wide-eyed, though he really wasn’t sure where Tor was headed with this.

“You’ve got to promise me you’ll only use this...” Tor frowned heavily, and folded his ears back. “I hope you’re never in a situation where you have to. This is only when you’ve got no other way. When you, and your mission, is at such risk...” the bothan tightened his jaw, and pulled a tiny piece of flimsi out of his breast pocket. “Learn this. Memorise it. And then destroy it. This is one of the single most secure codes of the House. Send it on any frequency, or utter it to the right person—I’m sure you’ll be briefed on how to recognise them over the next couple of days-- and it will be answered. Without question, without exception. You understand? This is no mere distress beacon. Only use it when you have absolutely nothing left.”

Tusserk stared back at Tor, his heart pounding in his chest. He suddenly felt way out of his league. “I... I understand...” he managed to choke out, clutching at the flimsi that had been pushed into his palm. “Thank you.”

Tor pulled him into a brusque, awkward hug. “You make us proud, Tuss.”

Only use it when you have absolutely nothing left. Tor’s words from so long ring in my head. Dare I? Can I? Can I even remember...!? Of course I remember. It’s all there. It’s there in my head. I just need to focus. I just... oh, kriff. Should I? I’m not meant to know, what if it all comes back on Tor... but what if... what if he gets to me, in the end. What if Jerec breaks me? The House... everyone would suffer. If there was ever a time...

I set my jaw, shut my eyes, and rattle off the code, my voice a low, breathy hiss. Words. Letters. Digits. Patternless, spanning countless languages. I don’t pause to think about what I’m saying, I don’t hesitate in the delivery. I don’t know how the man could possibly remember or relay it, but it’s out, now. It’s out. The man curls his lips and pushes me onward. He plays his part well. I hang my head and continue. It’s out. I can barely dare to hope.

It will be answered. Without question. Without exception.

We continue across the hangar, we are headed toward one of several massive boarding stations. For the first time, I acknowledge the Star Destroyer we are headed towards. My heart sinks, but the tiny spark that has just begun to glow is not smothered.

The man begins to whistle.

I really like this Tussy. different for you, but very nice. I would have never guessed it was your work :) ... Looks great.

Wut wut! Seems like you do a lot of this sort of thing, and quite well. You are much better than me at background integration!

Fantastic atmosphere in this one. :)

Nooo way, Asok! I cheat so bad with my backgrounds (unless they're nature-y, I'm cool with nature) all the time... I am utterly miserable at creating three-dimensional spaces, and my best method of having characters become a believable part of the scene? Hah, you can see it right here... it's the 'stand on flat ground and cast a shadow' method! XD

(However, thanks for the feedback, alla you! I'm gonna get better at this!)

Sweet...very cool. I could only hope to do some background like this...great work Tusserk