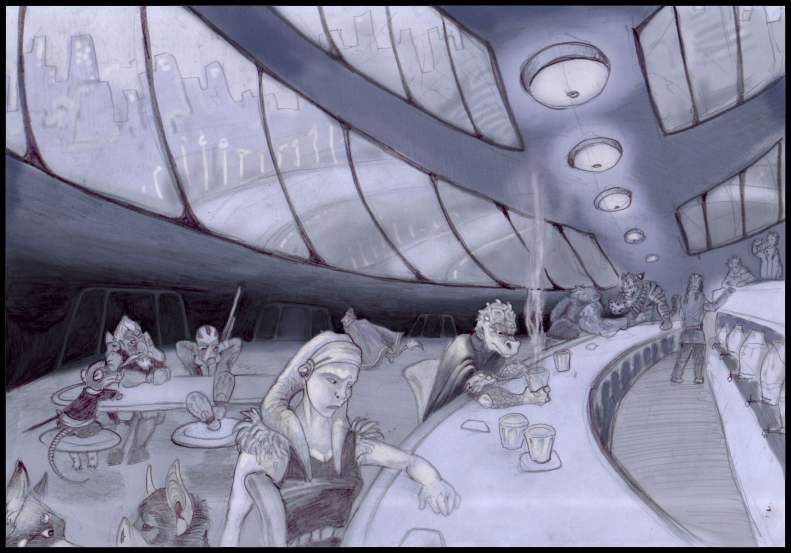 Out in the Mid Rim

But anyway. Toaster horribly betrayed the team and left Tusserk bewildered and heartbroken! So while Nimeq and Lonar took a bit of time (and the WordBird) to return a wayward rancor to Dathomir, Tusserk found himself in the most confusing situation of being alone with none other than Klopan, who just so happened to have invited himself back to the team. Good thing he returned with Kieran's 'blessing' (I think the words were something more like; "I still wouldn't trust him as soon as look at him, but you need to give him a chance."), or Tuss would have given him what-for the moment he stepped the door!

Well, Klopan and his constant tag-along, Ruttager... and Veshan Hardouin, a downright scoundrel of a Duros who traveled with the squad on occassion (a character played by GM's best mate, who would join sessions every now and again as his busy busy life schedule would allow!).

Klopan was set on hunting down Toaster and making him pay for turning on the squad, and Tusserk honestly didn't know if he was going along to help Klopan, or save Toaster from him. While the group paused for a meal and some fuel at a random establishment out in the Mid Rim, Tusserk opted to sit and brood over his whiskey-caf very much on his own!

I really like how you've managed to work a sketchy feel picture in with accurate and effective lighting and the cartooney city scene we can see through the windows - the effect is just brilliant! More please!!