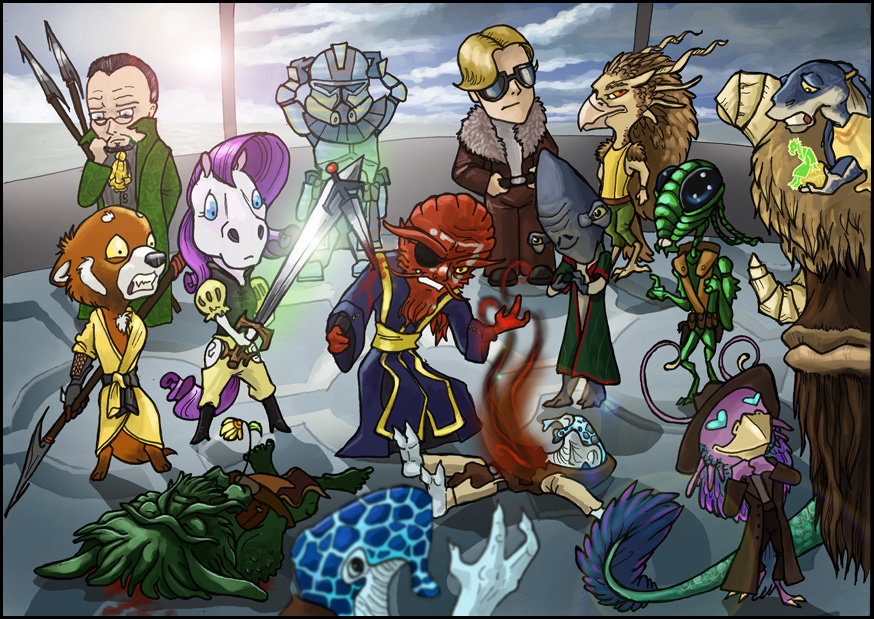 Another for the 'group portrait' series from our home game, this time comemmorating our mission on Manaan. This happened... man, easily over a year ago now in real-world-time, maybe not quite that long ago in-game. Still, a long while ago.

Blissful days when we were humbly working for the Empire, cleaning up after the Yuuzhan Vong war, only very vaguely aware of the extragalactic horrorterrors that may or may not threaten all of life as we knew it (answer: THEY DID AND STILL DO). Back in the days when everyone had lots of emotions and Evi 'got lucky' and Tendaji started doing some really really unsettling Force stuff and a bunch of Selkath thought we were the heralds of great evil and Jak kept ruining her clothes by shapeshifting without thinking of the repercussions and our Massassi didn't make it through an encounter but Y'ALL DIDN'T INVITE ME TO THE FUNERAL

Ahhh leave the poor girl alone, she's only got one arm at this stage! ;)

The sleeve is tied down to stop it flapping around. She's practical like that. She had to wear a pinched bathrobe around for a while after she ruined her good uniform!

(And she's also kind of just a little horrified after having seen Tendaji phase his fist through that Selkath's chest and possibly suck out its soul. :I Stop it Tendaji this is why the group was nervous about you being the boss.)

I see a shistavanen, a unicorn, and members of three different species recorded as extinct by the time of the Yuuzhan Vong war. Context. I needz it.

Tendaji, the Kissai (or 'Sith Pureblood' as all the kids are calling them these days, though this guy is a lot more 'pure' than the ones you see running around during Old Republic times, let me tell you) -- anyway, he's a product of the same experiment that created Jak. He (and anyone with a more mystical, 'trust in the Force' kind of bent) would probably say it's because the powers of destiny felt that it was necessary for one of his kind to be present at this critical stage in the galaxy's development or some other such fluff. Jak would argue that his specific species designation was a matter of chance, and he could just as well have been any species in the recorded history of the galaxy.

Khol, the (deceased, sniff) Massassi actually dates back to our first campaign! GM invented a little-known-little-explored-relatively-unimportant planet with a surviving colony of the species. Our first squad was sent out exploring and chasing up rumours, discovered the population, but... wow, it was so long ago, I honestly can't remember if we actually reported back on their existence or decided to keep them secret. The business with the Jedi fugutive and mad scientist ended up being a far 'bigger deal' during that session! At any rate, in our version of the universe, there are Massassi who survived. Over the course of the campaign, we revisited that planet several times, it ended up bombarded by the (dirty dirty) Imperials (cough ahem I swear it had nothing to do with our association with it... ahhh who am I kidding...) -- but we arranged to have the survivors relocated to Dantooine. 'Take them to Dantooine!!' was pretty much our solution for every NPC we didn't know what else to do with.

The first... six months or so of our current campaign were set on Dantooine. ;) Naturally, our Kissai was incredibly pleased to discover and 'reunite', so to speak, with a surviving remnant of Massassi.

And Rakata... well. Rakata. Who even knows what that guy's deal is!

He was discovered... dug up, or something, by Republic researchers, and taken to a facility on Ord Mantell to be studied. He was in some sort of long-term-storage deep freeze container? Doc might be able to tell you a little more, he was working in the facility at the time, but on a somewhat different project. Never got a name from him, just ever referred to himself as 'Rakata' - and would make the distinction of being THE Rakata, not just 'a' Rakata. But he was always very cagey, talking in riddles, never giving straight answers on ANYTHING. Actually, might have even been a 'she', who knows with fish faces? Tendaji might know a bit more, those two were in no-good cahoots ever since the fish invited himself aboard our ship, but Tendaji was also pretty cagey about sharing information. Typical sensitives. I'm sure there's more to his story, but at this stage in things it's nothing that I've been privy to, in or out of character! For her part, Jak would be quite perfectly happy never to see or hear from that fish again.

(And the 'unicorn'? That's just Equisha. Another one of us magic bubble experiment miscreants. She was a very, very broken Thakwaash. To this day we're not sure if her hair was naturally that colour or if she kept it carefully and perfectly dyed at all times. You're possibly seeing one of her tiny pink ears as a horn, if you got unicorn rather than just plain old pony to look at her!)

No species is ever really extinct, as long as someone wants to make a story about how they escaped extinction... that's your context :)

Just as long as no one defies the holy rhetoric of Star Wars Canon. (Seriously. If I hear the word "waifu" even once... )