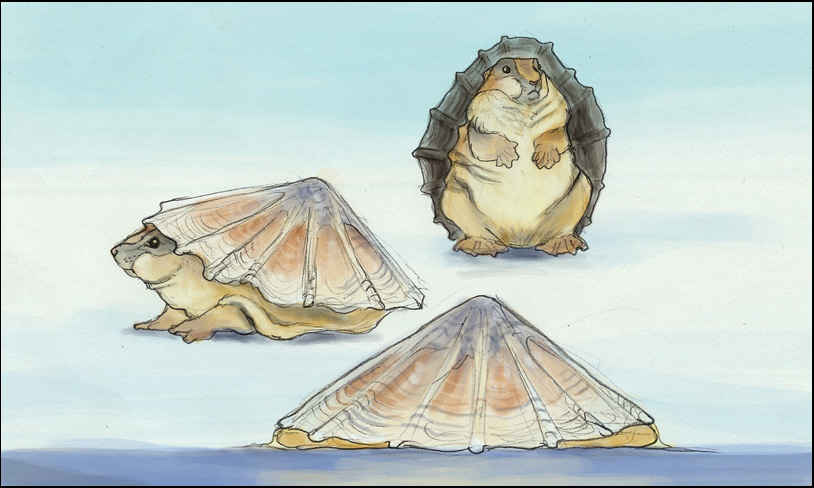 Little bit more invented wildlife... and these things, who am I kidding, they're basically lemming-limpets. A major food source for a lot of the lower-level predators, lemmets are odd little creatures that live in vast swarms. They used to be burrowing creatures, once upon a time, with hard bony plates on their backsides used to stopper up their tunnels against prying snouts. Over years of evolution, this plate extended to cover their entire body; burrowing no longer became necessary, and they would instead cling to the surface of the ice and use their shell as a shield. The stronger the cling, the better an individual's survival- in time they also developed a thick, sticky secretion and copious rolls of fatty, elastic tissue that would essentially allow them to suction, air-tight, against whatever surface they came into contact with. They are near impossible to pry away when suctioned on; requiring either specialised tools or a particularly impressive strength check. The only exception is when they breathe- the little creatures need to break their air-tight seal to take in air, and it is during these moments that they can be tugged away with relative ease. Several Csillan species have developed tremendously acute hearing and a method of stalking silently through lemmet swarms, waiting for that little hiss of breath before pouncing. In defence, lemmets have developed the ability to hold their breath for extraordinarily long periods of time-- which in turn, had them successfully turn to the sea for their own feeding purposes. They spend the bulk of their days out in the water, grazing on algae and taking in the odd microscopic space-krill, coming to shore at dusk in droves to settle on the ice and rest. They are adorable, delicious and tremendously fattening.

absolutely Adorable.. I want one as a pet. Replace my pet rock with a pet shell

I love your wildlife Tusserk. :D

Do you have any more creatures lined up?

I can see a heard of these guy's moving along the snow trying to outrun your other weaselcat... Would look like a snow wave.

Rodians have been known to electro club them. The shock stuns the little creatures long enough to collect them for their meat and mucus which, when made into a perfume, can be an aphrodisiac. The Rodians have been run off as of late by a group calling themselves the Space Shepards. LOL....just goshin'. Love the whole idea behind these little fellas and the pic is wonderful.

Judas, the first food product we encountered while in the US was a burger called 'The Baconator'. It was like nothing we'd ever known.

I imagine these creatures taste something like that burger did!

OHHHH this is so great!