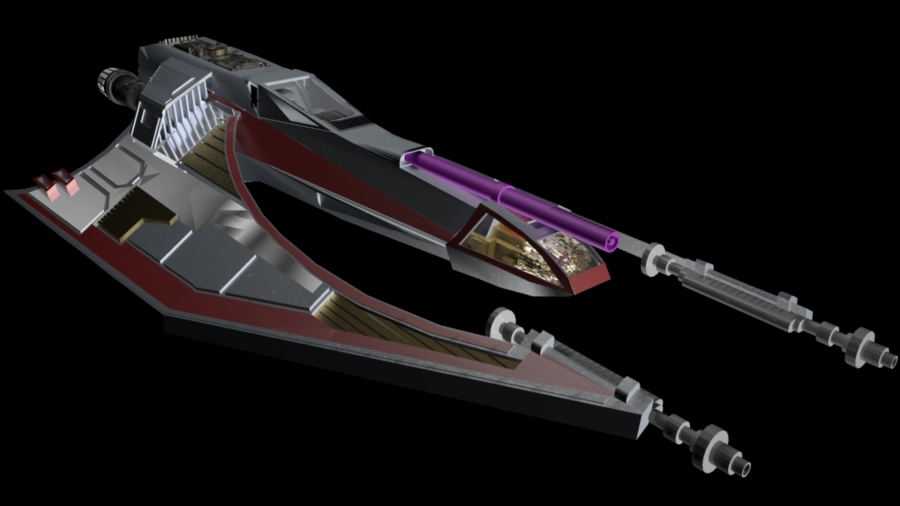 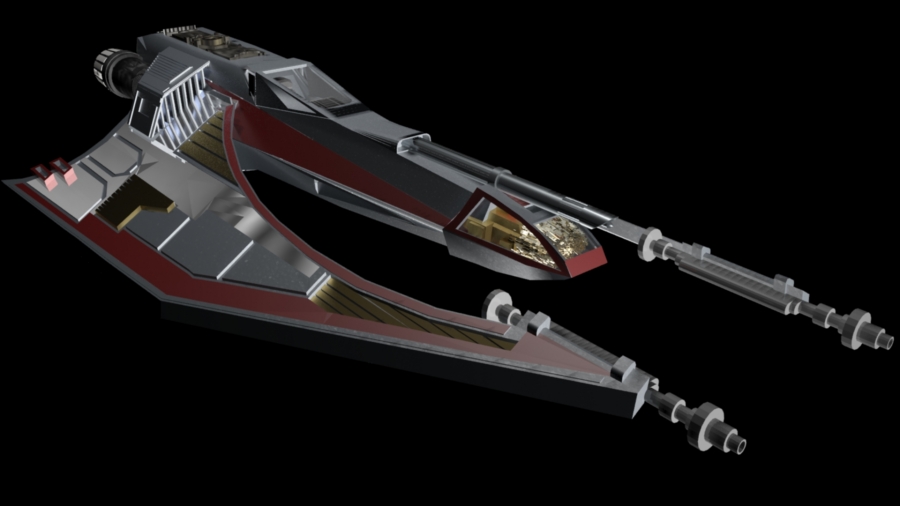 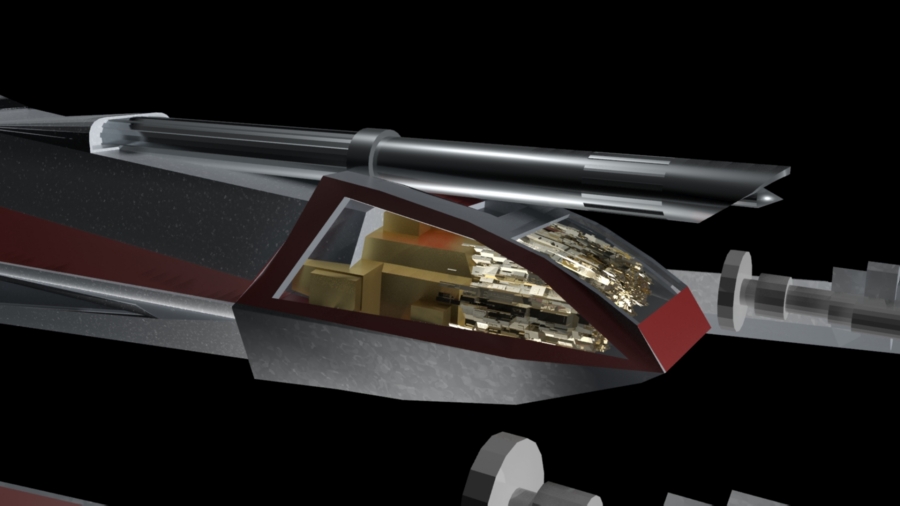 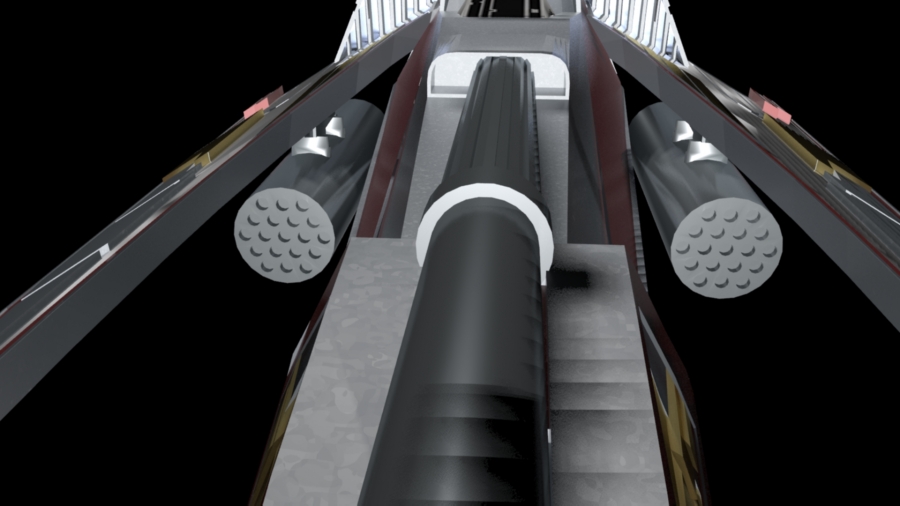 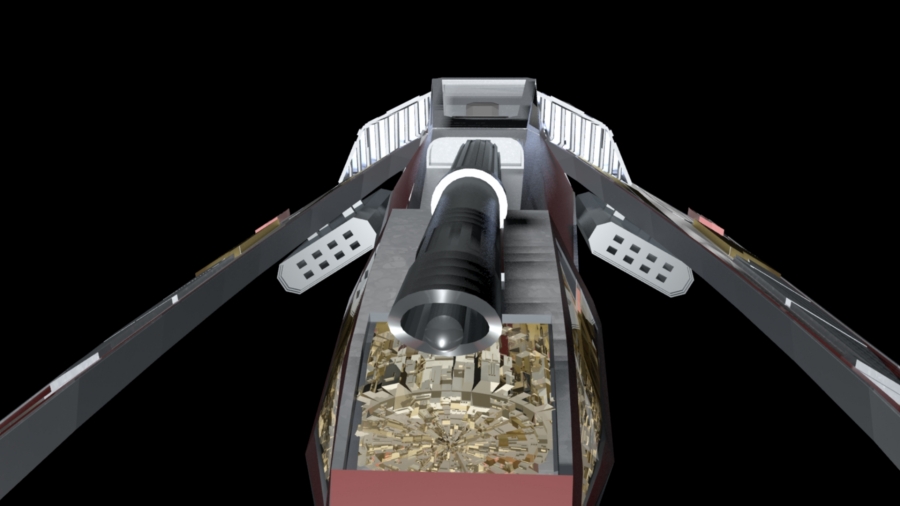 Working off the Rapier-class fighter as a base model, I shortened the ship and thinned out the wings to give it a sleeker look. I then removed the x-wing laser cannons and extended the fore cannons to give them more kick. A central ion cannon was added as a top side cannon. I haven't added the the rocket pods under the wings yet and I still need to color in the ion cannon.

1. This is more of a proof of concept design for the Dagger-class interceptor.
2. Made the engines bigger. Added material to the ion cannon and gave it a sharper look.
3. Added rock pods underneath the wings.
4. Redesigned the rocket pods.

It looks great. I would like the engines to be larger. I cannot see the ion cannon as I am on my phone, but if you can give it a little more of an aggressive look that would be good. By that I mean make the overall appearance more deadly. The weapons are good, I see the Ion cannon and love the placement.

And maybe could you try to make a model for me in Matte Black? I'd like to see how that would look. One of each in Matte Black would be cool.

The second picture shows bigger engines and a more refined ion cannon. The third picture is a close up of the cannon so you can see it better.

I worry about the a matte black when this one is done. :)

Very nice. I like the design difference in the Ion cannon.

I'm glad you like it. I will work on the rocket pods next and then finish her up. After that I will do a group shot of the three fighters together, one with the traditional paint and a second with the matte black. Then you should be all done.

The matte black is for a friend of mine who plays an on-line game with me. As far as the ships themselves go, I couldn't have imagined them coming out better. I saw you were planning on doing some clean-up of the request boards, would you consider doing a simple alteration and paint job for me?

What alteration and paint job? I won't promise a timeframe on it at the moment until I get a better look at where I'm at with other jobs that need attention.

Take a standard Z-95 Headhunter and paint the entire hull white with the exception of the cockpit, weapons, thrust nozzles, and a single stripe along each side of the fighter. The stripe will be black. I need four of these with the same paint job just with different colors. One needs to be all red with a black stripe on each side, another would be blue with the black stripes and the final needs to be black with Chrome stripes. The alteration would be the addition of a small ion cannon mounted under the fuselage of the Headhunter just behind or under the nosecone. Simple.

A headhunter would be a whole new model that I would have to design or find (assuming it was done as a #d model). I would say for now that it is probably best to put it up on the request forum. If no one else picks it up by the time my load lightens, I'll grab it then.

Can you make the rocket pods more flat and tight on the wing? Like with the intake manifolds for the engines?

should not be a problem. I'll work on that tonight.

Thanks. Then if that s the look I was going for then we can call this job done.

also added a pic of the redesigned rocket pod

Great job, now about the matte black ones, any idea when they will be ready?

I'm working on it. The lighting with matte black is apparently a pain in the butt for me.

I would like it very much if you could create for me some capital class vessels.