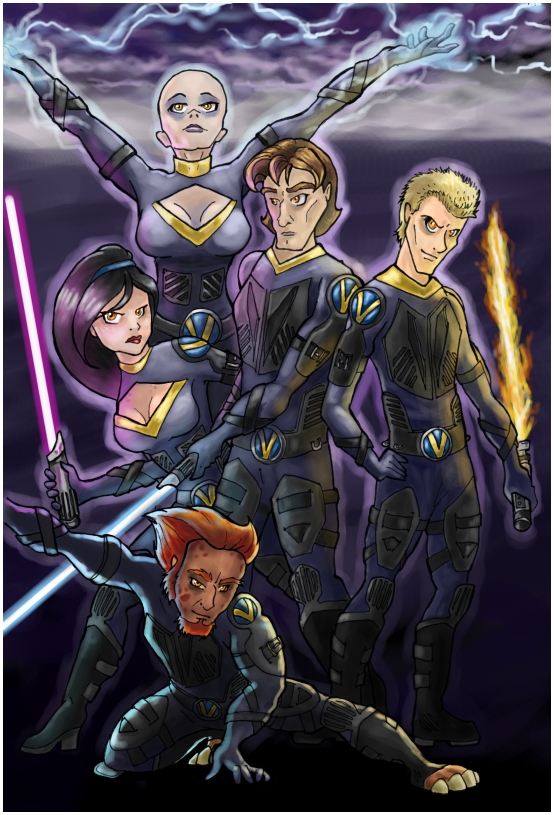 At the request of my GM, and oh man I seem to have finished just in time for this week's session! He has a grand way of creating strangely... familiar scenarios to give us a bit of OOC entertainment and levity during otherwise super tense and dramatic IC situations. In the past, it's been things like encountering Count Traak Oola (who doesn't drink... wine), and the epic that was Han-diana Jones and the Last Raiders of the Kingdom of the Flying-Space-Ziggurat of Doom.

Now we're set to encounter these guys- who hail from the Nimeq Viith School for Gifted Youngsters. In the back we have the Umbaran, 'Tempest', then the three humans; Wraith, Citadel and Inferno, and in the front is Nexu the half-Theelin. Darned kids and their silly nicknames. They fight for truth, justice, and the glory of the Galactic Empire!

I am seriously tempted to hop a plane just so I could game with you guys.
You have the most bestest adventures.

Also, is that a Theelin MALE?

"and in the front is Nexu the half-Theelin" ...

Do come play, Judas!! Though you'll have to travel quick, the campaign is barrelling towards its finale... Augh, the cliffhanger we were delivered last night! IT'S NOT FAIR! Every piece of me is exploding with jittery anticipation and I just... can't... handle it!

And yeah, Asok! Nexu is indeed A MALE THEELIN OMG! Almost as rare as a lady herglic! (He was probably the one I was most excited to draw out of the lot of them.)

And thanks Dred, haha, I feel the need to note that the colour scheme was chosen by my dog. I was all ready for liberal splashings of Evil Red...

Tussy, life wouldn't be the same without ya! This is very cool!