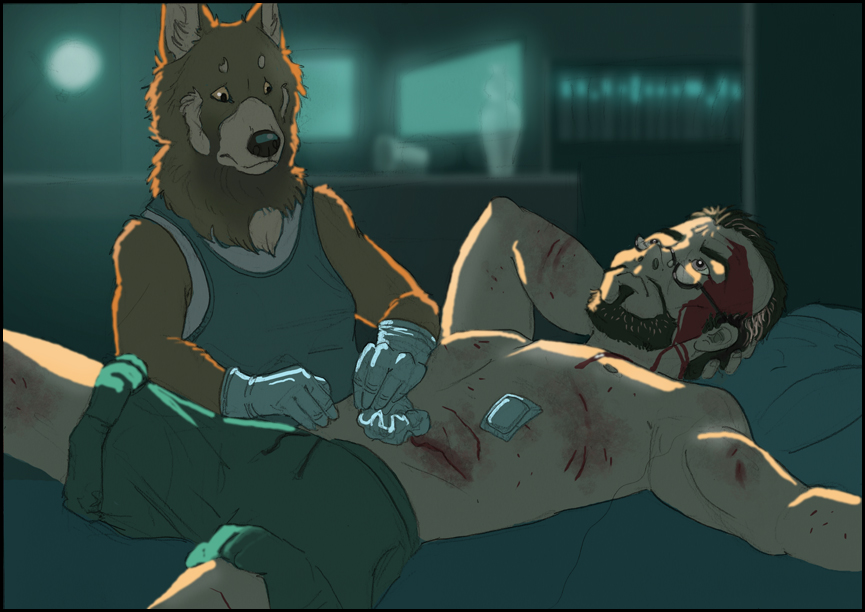 “I would have happily ripped the old man limb from limb. And then eaten him. Eaten another sentient being.”

“But you didn’t. Nobody’s blamin’ you fer lashin’ out after what happened, and nobody’s gotta know… gotta know th’ all of it. I’ve got yer back, Doc, ‘n I’m stickin’ with it 'till you got it under total control y'self. You’re gettin’ better."  Jak paused her work for a moment and scanned his chest up and down. She found herself biting her lip and making a concerted effort to push aside those feelings… he was frakking married, for frak’s sake! ”'sides which,“ she went on, as gently as possible as she started wiping away dirt and blood. "You aught-” she caught herself. “You shouldn’t be blaming y'self for feelin’ things that y'know don’t actually come from you.”

“Don’t they? I was a monster long before I donned the facade of one.”

The Shistavanen paused again, and regarded him in thoughtful silence. “What… d'you mean?” she asked, slowly, gently, without so much as a hint of judgement. She’d been trying to put all the pieces together, and had a suspicion she knew exactly what he meant, but she decided to at least give him the opportunity to offer it himself.

In silence, she swapped her current towel for a fresh one, and wet it down.

He kept staring steadfast at the ceiling, “Do you know how old I was when I killed my first Jedi? Thirteen. According to my cultural progenitors, that made me a man. I looked her right in the eyes as I slid my gauntlet vibroblade into her throat  She was unarmed. Surrendered, actually. But we weren’t getting paid for live capture. And I drew the lucky number. We drew lots on who would get to execute an unarmed seventeen year old girl. And I won. I won.”

Jak resumed her careful cleaning of the countless nicks, slices, grazes, cuts that littered his chest and arms. She’d gotten enough filth off  that she felt confident going for ripping open some antiseptic swabs, dabbing each tiny wound after wiping them down again. There was probably far more efficient cleaning and sterilising gear somewhere in the Med Lab, even with the recent destruction, but she found herself content enough using her field kit basics.

She was very quiet, and very thoughtful for a time, trembling just a little as she worked. Another piece, slotted into place… but… but some things just didn’t make sense. “We were just finished a job on Ord Mantell, 'fore the quarantine lockdown,” she finally said. “Did a favour for the Mandalorians there, 'n they gave us the help we needed. I followed m’ orders. Did what I thought I was born… what I was made t’ do.”

Jak had thought about it a few times since, but never so deeply as she did now. She’d never actually felt ashamed of following those orders, but now… “Wasn’t pretty. I didn’ look nobody in the eyes, they weren’t even people to me. Jus’ obstacles.” Her trembling increased, visibly, and was easily apparent in her touch. “And then… after you came on board with us, when I realised I cared what you thought… I was real anxious of anybody ever mentioning it in front 'f you. I was… scared, I guess. Scared you’d think I was some kind 'f monster, for something I done before I’d really even started to figure who I wanted t’ be.”

He responded with a bitter little laugh, “How’s it feel to find out the man you were trying to impress is just as bad? Worse, even.?”

[Just a little illustration of one of my favourite moments from the old home game. I miss it.]

You did an amazing job with this one.  Their expressions are awesome and the story is great.

Curse you, colorful and well-written vignette, for wanting me to be part of one of these games even more! What am I supposed to do, STOP playing Elder Scrolls Online?

Thanks guys! <3 I'm managing to keep Jak alive a little through SWTOR, but I sure do miss having a regular tabletop group. Nothing really compares to the storytelling capability there, as far as I'm concerned.

Amen to that! Tabletop games are the only time I ever willingly do math!