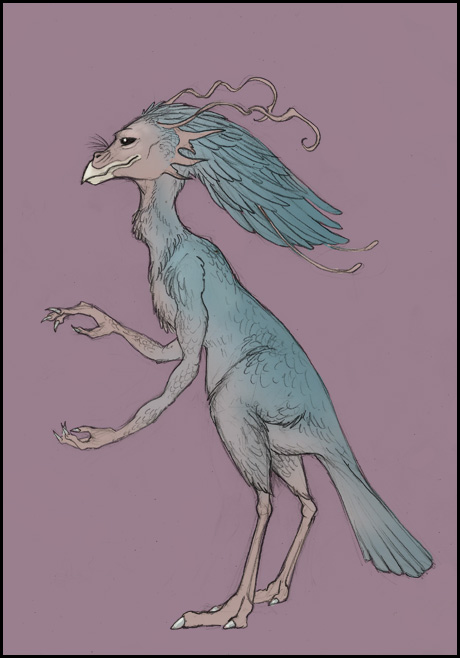 I've mentioned before how when I read the New Jedi Order novel 'Traitor' by Matthew Stover, I was struck by just how alien his version of Vergere was. Not just that she was a mystical colour-changing bird alien, but the descriptions of her movements and mannerisms were so entirely non-human. I had a go at trying to draw what formed in my head while reading; even if it doesn't suit anyone's game to use as an actual Fosh, being so far removed from... well, any of the other images, really, and the generally accepted 'canon' appearance overall, haha... it might at least serve as an alternative birdlike alien?

Anyway, this is one of those 'thought a lot about' pieces, so I thought I'd share some of the thought processes that went with this!

- Purposefully unclothed, because clothing on this body would basically undo the whole point of me trying this? I'm sure someone more attuned to outfits than me could work out what a being like this would actually wear.

- The face is pretty arbitrary, really. I stuck with Stover's fully black eyes rather than Wookieepedia's quoted red. 'Spiral antennae' can be interpreted so many ways, so I just went with my personal preference of spiralling the way goats' horns do, again, pretty arbitrary! The shape of the crest, little facial protrusions, all still arbitrary; I guess the only thing that some thought went towards was purposefully giving the face some length (becuase Vergere is described as having a 'muzzle' which just wouldn't suit a more sparrow-like or owlish face), the whiskers, and having a distinct beak at the tip, because while I'm intrigued by some of the slightly more dragon-face like interpretations, I feel like that's not in keeping with Vergere being constantly described as 'avian'. Star Wars world isn't shy when saying something's more like a reptile! (Must... resist... taxonomical... tangent..!!!) Also, a very 'birdy' neck is described, particularly being a fragile/vulnerable point. Tried to make it something a bigger creature would be all too eager to try grabbing, haha.

- The rest of the shape of the body really all stems from the legs. 'Back bent legs' is not an uncommon description in alien/fantasy species, but I usually hate how it's used, heh. Often the drawn interpretation just ends up the common digitigrade stance; ie, someone walking on tip-toes. Not a bad thing, but not really worth of being described as backwards-bent. It IS, however, something you actually see quite blantantly amongst birds, just look at a stork! Their hips/thighs are so high and hidden amongst their feathers, all you see is the ankle- serving as the knee. So that's what I really wanted to have happen here, and for the feet I borrowed very much from a bird that's built for walking, ie an ostrich. Now, Stover also describes Vergere as laying down, almost catlike, with all her limbs tucked/hidden underneath her body. The only way for this to be possible, with such legs, would be with a more birdlike body shape, rather than a straight-up-and-down 'human' build/posture; the pelvis extends a lot further back from where the legs attach. And so I ended up adding a tail as well, pretty much to balance the body- tails are never described, present or otherwise, but my stupid biology brain says on this body a tail makes sense so there it is.

- The arms are weird. They're meant to be weird. Stover describes them as long and gangling, weirdly fluid, like having too many joints, making strange motions. I fussed and fuddled with them, and in the end actually putting in an extra joint seemed to cover it. They don't look 'normal' because they're not, and they're not meant to!

And so this is what ended up as the result. Small, agile, fragile. Light on its feet, thoroughly inhuman. Sapient alien bird, whee!

Looks good Tuss...    That's a lot of thought into the picture, and it makes sense :)

I love having a naturalist on the roster! You're like a more grounded Terryl Whitlatch.

Good job, I like how you thought up the design from what you read.

Just wondering if you are inspired at all by Terryl's work?

Ha! Yes and no, I guess? I've always enjoyed Terryl's stuff, being the alien/creature lover that I am, and it'd be pretty safe to say I find poring over her work pretty inspiring! But I think any similarities I have with her work would come more from the fact that we come from similar places artistically, rather than any specific influence or conscious attempt to emulate her style, if that makes sense? When I'm drawing alien creatures, I tend to be surrounded by references of real world animals rather than other people's interpretations of the aliens, and I have a very strong feeling Terryl's workstations would be very similar in that regard!! Hee hee. I love when I can pick the animals she's drawn from when putting together her creatures.

This piece reminds me of those old avian artistry tombs from the 1800s. Kind of like those of John James Audubon (Jean-Jacques Audubon) the French-American ornithologist, naturalist, and painter. Very well done my friend.