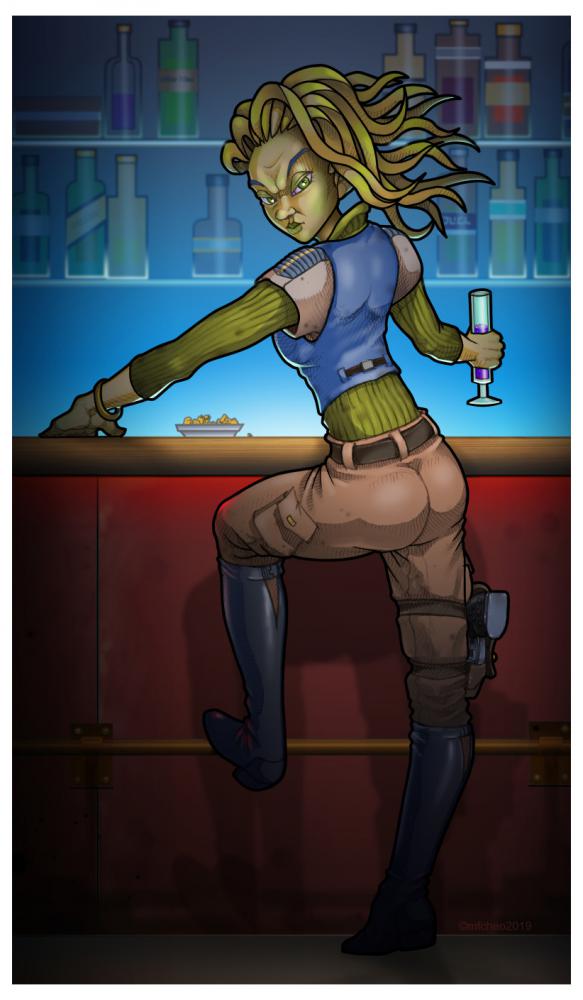 Thanks everyone for the kind words and encouragement. I felt the need to change my original concept so..

Nyla did not like this star system. At the first ship port she kept on getting strange looks and stares. Possibly her species being a rarity (she had yet to see her own kind), she eventually got word after treating a merchant captain to more than several drinks of the infamy that of two of her kind that were sisters, had made an appearance and worst of all, were Jedi. Word had also gotten around that they had been killed so her scouting of local Cantinas raised many an eyebrow. Great.

As a transport smuggler the last thing she wanted was attention. She needed to get out of this bundle of planets but loathed not doing so without a heady profit. She remembered an engineer contact that was able to modify a hyperdrive similar to what she had on her ship to class .078 with an 85% efficiency rating. That could come in handy in a tight situation. But it was black market and pricey.

She entered a Bith run Cantina for a business exchange. More 'looks' and even inquiry at the entrance by the Gamorrean bouncer of lightsabers or vibroblades made her really wish to get off planet soon. He looked at her ancient hold out slug thrower, coughed a guffaw and tossed it back to her. The music assaulted her senses but she tuned it out and made sure her tendrils of hair were in a relaxed and pleasant state helped along with the talented concoctions of the attending barista.

She eyed her mark, a Ranat, took a seat opposite and began negotiations. A few words and the sliding of a data chip for the cargo description. Everything looked simple enough but something was 'off'. Her tendrils sensed something. The numbers were too even. Everything was too neat.

Did the Ranat's eye just twitch? The constant light from the front entrance strobed a little and the Ranat's left shoulder muscle contracted going for something below the table.

Nylla flipped the table forcibly up and then down jamming it on the Ranat's lower mid section at the same time sliding off her chair, down and back while quick drawing her slug thrower. She fired off a staccato of rounds and the slug throwers unknown report had the desired effect on the unfortunate Ranat, closing accomplices, and Cantina patrons.

Low, back against the wall near a corner, she scanned for her next move...

EDIT 10/2/19: I have no idea what the origins of the above are or request. but I am redoing this based on the keywords and adding that it is a 'Mikkian'. I didn't render the red Mikkian 'cause I don't know how/what the 'hair' appendages are really like. (hair? fins? controllable?) So, am starting another based on the tentacles on the head. It is a WIP and am posting the initial cleaned up B/W drawing hoping to comply with Xanamiar's initiative.

EDIT 10/10/19: The redux is done. I may go back in and adjust framing/space around character.

I agree with Mando, looking forward to see how this one turns out!

The species is revealed as the Mikkian according to the Star Wars: Uprising website.