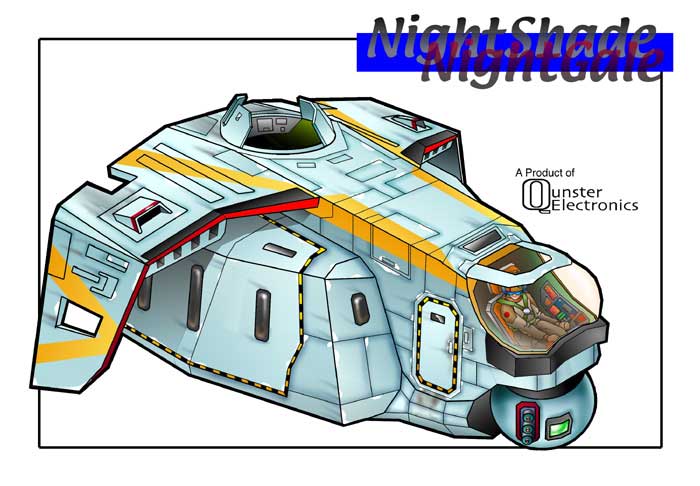 Designed by Qunster Electronics as an independent venture in the short range craft market, this vehicle was designed to fill the need for a shuttle designed to transport casualties and is ideal for small unit insertion in counter-insurgency ops. Loosely based on the larger Attack Gunship (Qunster was once a sub-contractor for Rothana Heavy Engineering) this repulsorlift craft has a crew of two: Pilot and Engineer/Gunner and can carry up to six moderately armed humanoids or the equivalent in cargo. It is armed with a slaved chin turret (weapon system varies according to client) and has a hard-point for an optional roof turret (turret and associated hardware reduces available internal carrying capacity). This Prototype version shows a shielded pintel that can mount a variety of heavy infantry weapons.
The Medical variant has internal stowage replaced with life sustaining modules and can carry seven casualties with a Medical Assistant replacing the Engineer.
Due to ongoing commitments with Rothana Heavy Engineering, The Nightshade/NightGale has had a very limited production run with mostly Freelancers and some Medical outfitters as clientele.