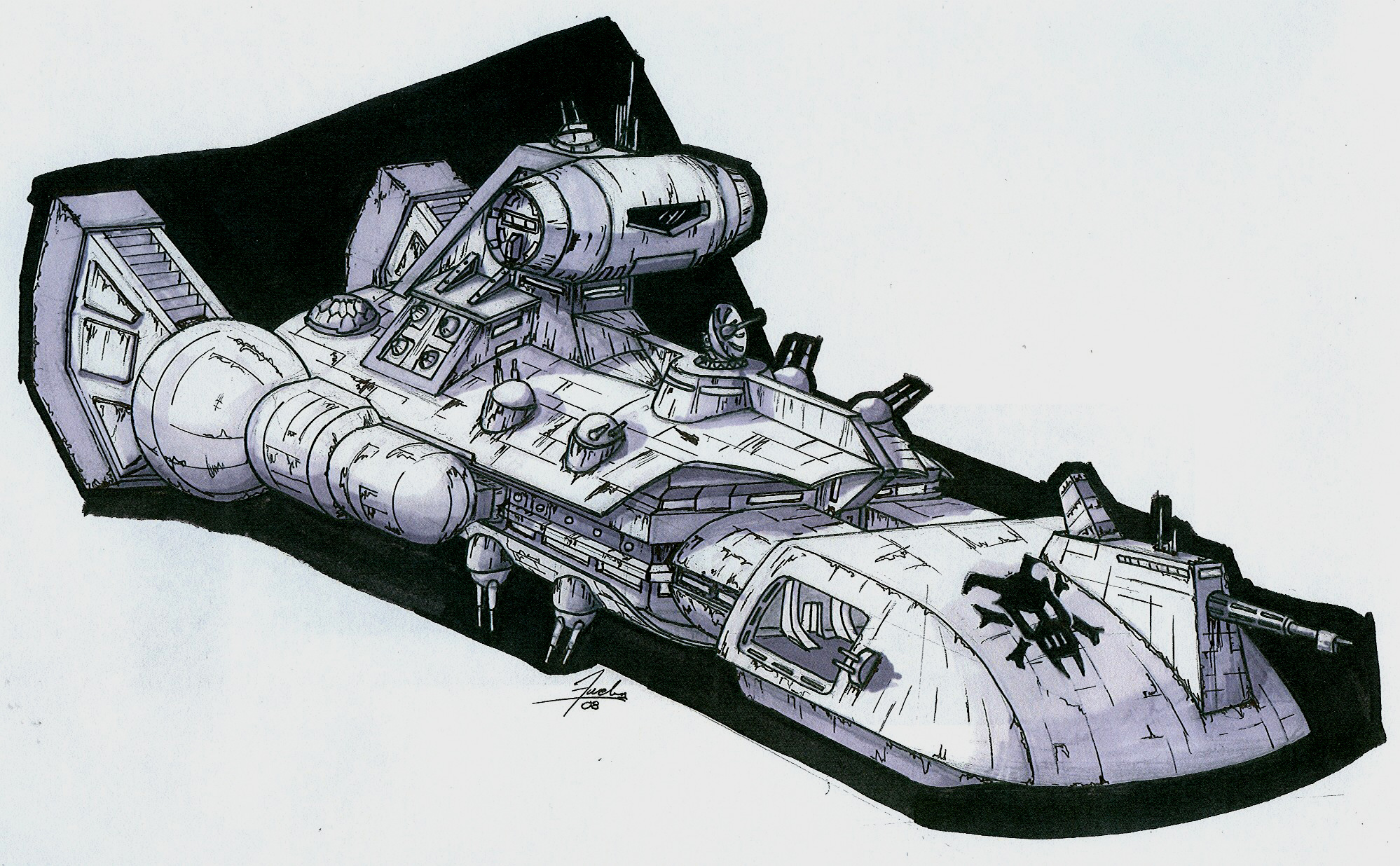 The Pirate Ship Min's Wind roams the edges of the Outer Rim toward the Unknown Regions. Also a lisensed privateering vessel for the Empire, The Min's Wind sports powerful sublight drives, a ragtag squadron of starfighter uglies, a multitude of turbolasers and tractor beams, and a bow mounted ion cannon capable of disabling ships twice its size.

It does have that used look about it. It's been around the block a few times and still kicking some @$$.

Very solid piece of concept art! I love the bridge!

I love these kind of ship drawings, and your design is awesome!

You are gonna have to post some stats for this thing. I like the looks of it and I notice parts from a Dreadnaught and a Corellian Corvette on it. I like it! Let me know if you've statted it.

I also must say that I would love to use this piece. A great concept, executed flawlessly.

Yes, what class of ship is this? The design definitely looks Corellian, but the Dreadnaught elements seem to be there, too. What's the history?

Thanks for the interest. I have not really worked up any stats for this ship. It is approximatly 1.5 times larger than a Correlian Corvette. The original shipbuilders were the Aquavians of the Covalta system in the Unknown regions. However, once it had been assigned to Min Jukta, he was banished from the Covalta system and sought a commision to privateer for the Empire. Over the years, as the vessel required repairs and reconstruction, it was often rebuilt with parts of other derelect ships, since access to the original shipbuilders was denied.

Min Jukta was finally able to assemble a competent crew of pirates and fighter pilots, so that the ongoing damage to his ship has decreased significantly. The vessel now hold only a vague resemblance to the specifications to which it was first built and has become almost as much of an 'ugly' as the starfighters in its landing bay.

I made most of that up as I went ;)... It has given me the idea to draw the 'virgin' version of this cruiser. Since it will be a standard design, I should be able to assign it some better stats. Look for that soon.

BTW, anyone who can put it to good use in their campaign is welcome to do so.

Love the ship. I actually wouldn't mind putting together some stats for it, if you wouldn't object. I run the site saga-edition.com and we're currently undergoing a facelift (viewable at sagaconversions.mattylee.com) and I will be looking for some exciting new content pretty soon to herald the relaunch. This would definitely fit the bill.