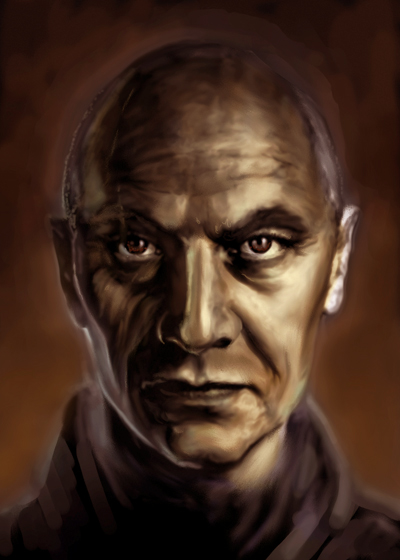 Lord Arad Dominin Fell (sometimes Arad Dominin or Arad Fell or just Fell) was a political agitator during the years of the Galactic Republic. After the fall of the Republic and the rise of the Galactic Empire, he continued as a political heavyweight while secretly acting as a member of the Inquisitorius. Fell was instrumental in the planning and acting out of Operation: Darkfall, though his involvement was largely behind the scenes.

Fell appeared on the galactic scene shortly after the Invasion of Naboo, in 32 BBY. Little is known of his history before then, and what is known is subject to speculation. From his accent, it can be surmised he was born on one of the Core Worlds. He was wealthy, although how he had apparently amassed the significant amount of wealth he possessed was not known.

Dominin took no direct role in galactic politics; instead, he served as a lobbyist for a number of different causes. Later, as his political clout increased, he served as an advisor to various Senators.

Fell used a number of different names during his life. It has been suggested that they are all pseudonyms, and that his real name is in fact something else entirely.

used Steven Berkoff as a reference.

He looks a little like he could be Chancellor Valorum's evil twin. (Oh, wait, that was General Zod.)

Yeah that kept popping in my head after I worked on it. O

Kewl pic. Like the blend of color, shadows, and light.

It's a little too dark for my taste. I work on a laptop and when I see the contrast on my work monitor it always is too damn dark. I know all about calibrations and profiles but it's a difference from pc, hd quality to mac print quality. Anyway more along the way, soon enough.

Member since: 2007
Location
Youngstown, Oh, US