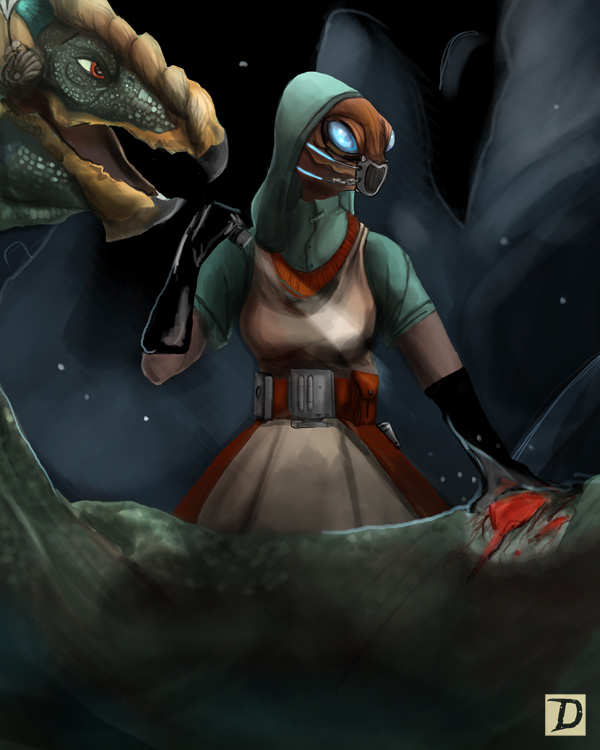 Asok did it first here: http://www.swagonline.net/node/5428

Excellent work - love the subtlety in the colors.

This artwork is fantastic, but I have one question. Why does this Gand, which is an insectoid species, have breasts? Great work though!

On the homeworld of Gand, there was a particular region inhabited by this usually very soft-spoken and slightly xenophobic species in which holovids from some of the more human-centric parts of the galaxy became exceptionally popular, and quite firmly embedded in their culture. Mammalian characters became quite iconic throughout the region; and slowly, subtly, through the years, started to impress a rather unrealistic ideal of the ideal biped body shape. Without even consciously realising it, young male Gand found themselves more attracted to the lady Gand whose bodies more closely mimicked those attractive humanoid holovid idols. At first, it was barely noticeable; it was just that the female Gand with a bit more shape to the chest piece of their carapace happened to be the ones more likely to 'get lucky'. As the generations wore on, however, and the human-centric entertainments continued to prevail, the change in the overall 'look' of society became more and more obvious, until the superficial resemblance between the female Gand's carapace and the female human's chest was as we see in the image above.

Or perhaps, much like the fact that the genes for patchy coat colour and floppy ears are in some way linked to the genes for a calm temperament across a huge range of species upon our own humble planet, perhaps... the genes for an upright posture are inexplicably linked to the genes that pile extra 'baggage' on a female's chest? I mean, there's no reason to believe that this lovely Gand has actually been depicted with mammary glands; who knows what her arrangement of internal organs is like? She has a breathing apparatus; so she is of the Gand subspecies that has lungs. Maybe her arrangement of reproductive organs, to allow room for... eggs, or whatever/however it is that Gands create Little Gands... maybe that means her lungs are pushed further 'outwards' than the male Gands ever need to be, and the shape of her carapace reflects this.

...or maaaaybe, just maybe, it was an arbitrary decision to help us mere humans identify with her as a female character a little more easily? ;)

Who can really say.