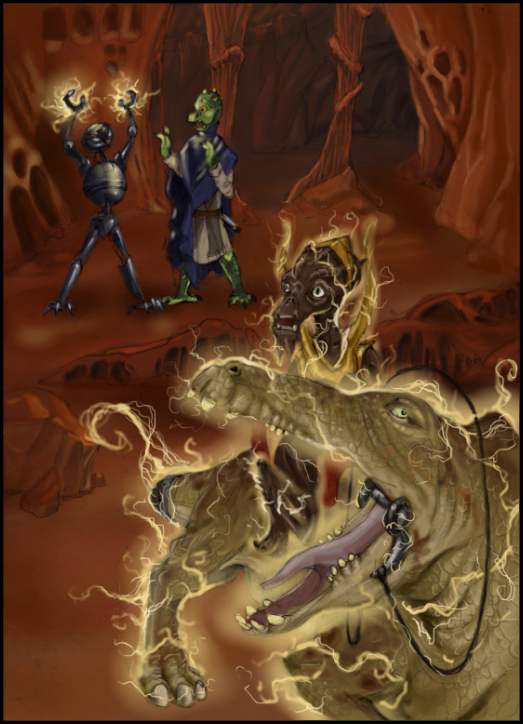 This scene is from a rather epic session that happened about a year ago now, but I've finally gotten myself together to actually illustrate it. Tusserk was having enough trouble dealing with his own issues, desperately trying to prove his worth as a Padawan so that his could re-continue his training... let alone trying to keep the rest of the squad walking a good path!

We were on an urgent rescue mission that took us to Geonisis, and the climax was a face-off with a Geonisian Queen, who we had been warned earlier (and somewhat ominously) could 'see into the minds of droids'. When we came to the final battle, as we faced her, she warned us that 'The Reaper' was amongst us-- and to our total bewilderment, flashed a memory into Toaster (or X1E7, our darling force-sensitive 'droid')'s mind. With the memory came the knowledge of a terrible power, the likes of which none of the squad had ever seen before [insert pseudo-science babble here dealing with charged ions and all other sorts of chemistry and physics goodness]; effectively, a type of Force Lightning that could be wielded with robotic limbs.

Desperate for more information about his past, Toaster started drilling the Queen, but she was reluctant/unable to give any more. Finally, he flung his arms into the air and literally FRIED her on the spot, crying (and I kid you not, this was shouted gloriously over the table to thunderous laughter from the rest of us); "Perhaps THIS will JOG YOUR MEMORY!!!". It was absolutely classic.

(And Tusserk was, of course, quite mortified by the whole deal.)