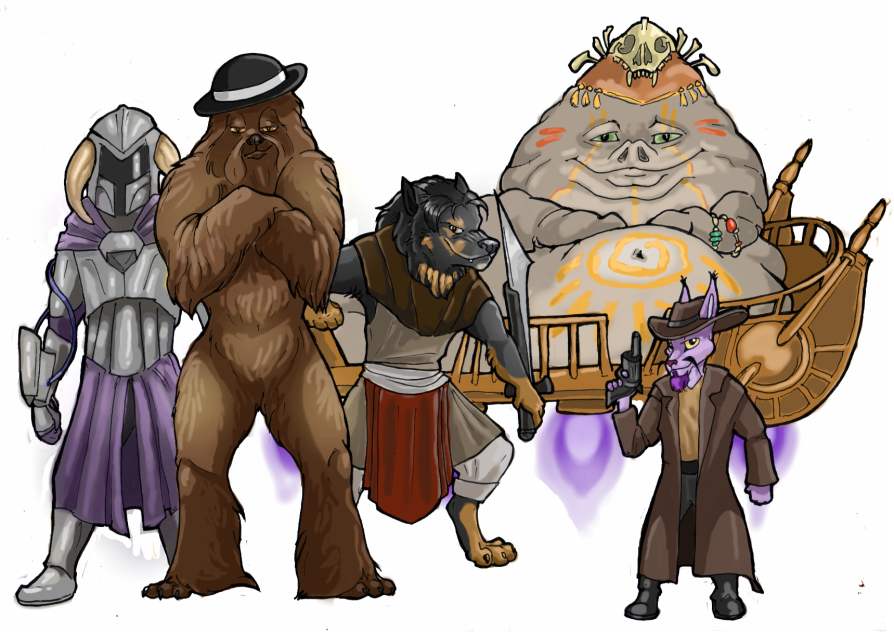 One of the perks of being married to the GM is getting sneak previews of upcoming sessions.

I don't even know who these guys ARE, heh, we're due to meet them in a couple of weeks, but I'm faaairly sure they're a crack team of bounty hunters. I hope they're not planning on hunting US!

Iktotchi with a wrist rocket launcher (GM shows me Saesee Tiin's mini, and says "Mostly looks like this!").
Wookiee lady in a bowler hat (GM says; "I don't know how you make it look like a lady, but do it!". I gave her hips.)
Shistavanen with some sort of sword thing. (Modelled a little after our dog. GM squealed with joy when he saw the colours.)
Hutt... Hutt. I can't even begin to try to understand. (GM hands me a little cargo skiff, "His repulsor sled looks like this!")
And then he gave me a stack of pictures of Squibs and the main character from Red Dead Redemption. ("He's purple!")

This is my new favorite thing ever.

That's so awesome I need to spell it "Awexum"!
AWEXUM!!!!

This makes me extremely happy. Lol. And I wish I had you around to draw for MY campaigns all the time.

The GM knows the will of the force.