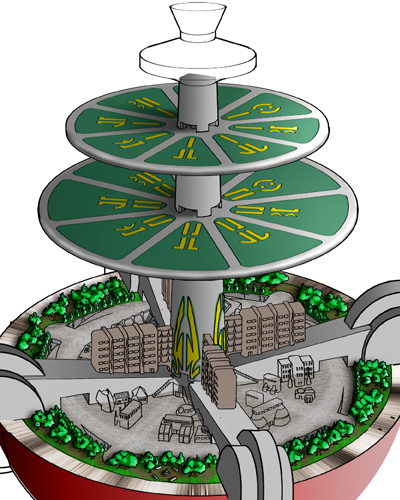 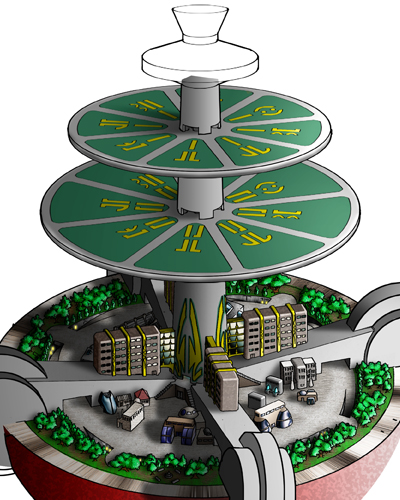 Okay, here's an update. I've included the other WIP for purposes of comparison.

I've colored the buildings around the bottom, and added some shading. I've also replaced the edge around the docking areas, as Eclipse suggested.

What do you guys think? Any suggestions for the structures below? What about the command area at the top? I think it could use more detail before coloring.

But something I've been wondering... what about that poor little ditty on the top? Will he continue to be neglected?

I've actually been holding off on that little ditty on top. I don't quite know what to do with it yet. I mean, I know it's the main control center for the thing (and probably a private residence in there for the big guy in charge, but I'm still struggling with the final design. I want something that fits the design of the rest of the station, but isn't just simple shapes. I'm also thinking of giving the huge hinge-circles around the outside the same treatment. Any ideas? Would it be worth my time to populate the streets with people and speeders, or does that even matter?

As someone with a bit of a vested interest in this... I'd say yes, it's definitely worth your time to populate the streets with people and speeders. And probably ships on the docking platforms, too.

As far as the ditty on the top goes, well, that's tough. "Fits the design of the rest of the station, but isn't just simple shapes" might be a tall order. It might be worth looking at similar shapes in modern architecture. That includes everything from aircraft control towers (the functional equivalent) to Seattle's Space Needle, and probably a lot of stuff in between.

The hinge circles I would keep as starkly functional as possible. Just big, massive structural members - probably an unintentional reminder to the residents of the facility that they live in a harsh environment, which is why they need big blocky hinges on their retractable shield.

Admittedly, I'm a little unclear on how you're imagining this shield and the hinges, but if it is supposed to end up with an all around egg shape, then it makes sense to me for the control center to be an extension of this shape. Rather than have the shield extend over the 'ditty,' let it act as the upper edge of the shield. As far as functionality, a command center that doesn't need to rely on a shield makes more sense than one that does. Aesthetically, I think you're thinking along real world lines where you always want the peak of a building small to allow sunlight to the lower levels. I don't necessarily know what kind of environment it is supposed to be in, but if it's as unpleasant as you suggest, then it seems probable that these parks would be relying on light from the upper levels of the station and not outside. I'd ramble more, but I don't know how useful it would be without knowing more about what and where this is supposed to be.